You can find on this page the Japan geographical map to print and to download in PDF. The Japan geographic map presents the topography, elevation, rivers, mountains, climate and physical features of Japan in Asia.
Japan is an island nation in East Asia comprising a stratovolcanic archipelago extending along the Pacific coast of Asia as its shown in Japan geography map. 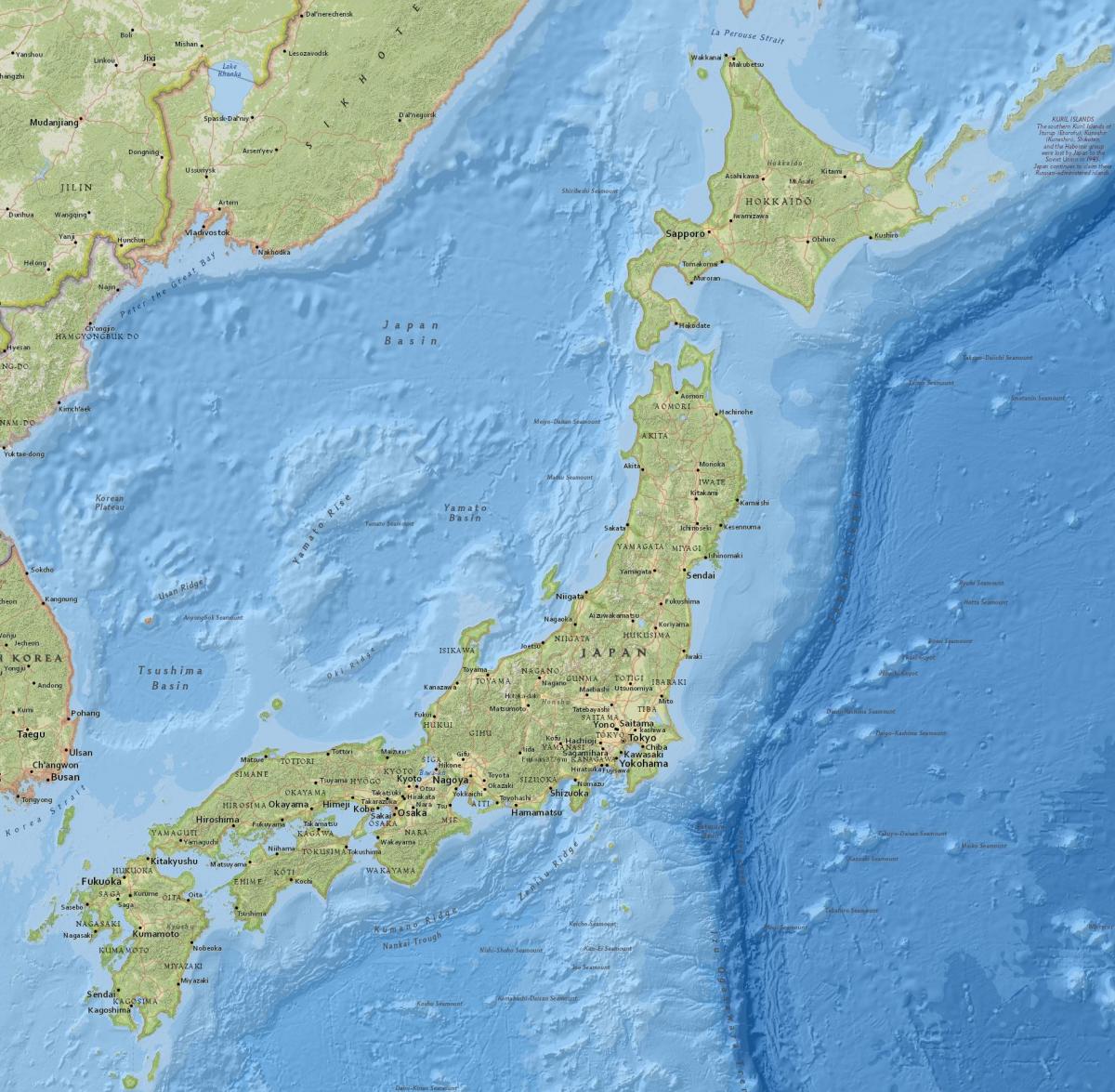 The Japanese islands are covered by mountains as its mentioned in Japan physical map, most of them heavily forested, and crisscrossed by short, swift rivers. Only a few of the rivers are navigable. Relatively little of Japan physical land mass is suitable for agriculture, only about 15 percent, the same land that is also most suitable for living. The population and areas of agriculture are therefore concentrated together.

Japan can be a dangerous place. Three of the tectonic plates that form Earth crust meet nearby and often move against each other, causing earthquakes as you can see in Japan physical map. More than a thousand earthquakes hit Japan every year. Japan also has about 200 volcanoes, 60 of which are active.

According to the Japan physical map, the Japanese archipelago consists of 6852 islands, including the northern territories ( the islands of Etorofu, Kunashiri, Shikotan and Habomai), of which 421 islands are inhabited and more than 90% of japan islands are uninhabited (Nihon Rito-center, 1996: 1–2). 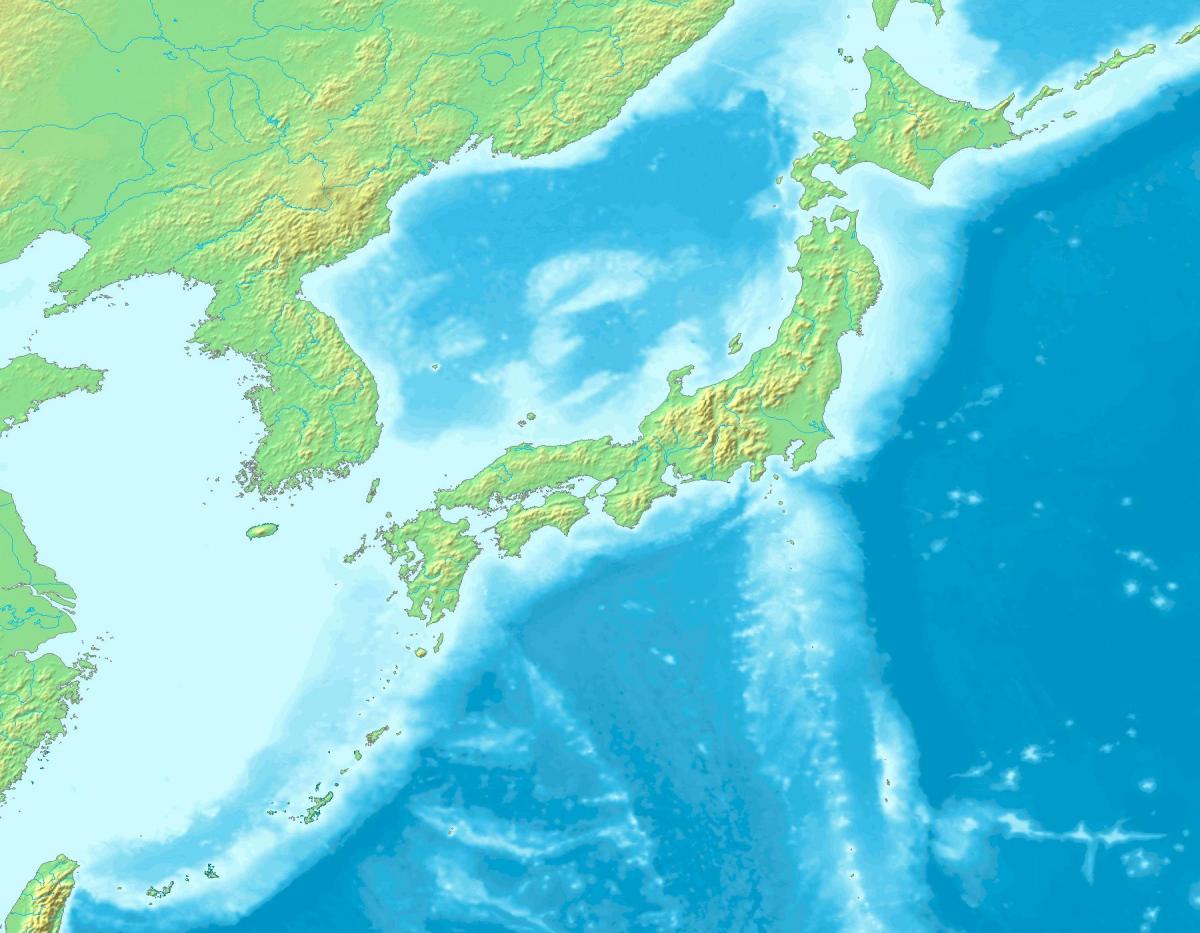 About 73% of Japan is mountainous as you can see in Japan topographic map, with a mountain range running through each of the main islands. Japan highest mountain is Mt. Fuji, with an elevation of 3,776 m (12,388 ft). Since so very little flat area exists, many hills and mountainsides are cultivated all the way to the top. As Japan is situated in a volcanic zone along the Pacific deeps, frequent low-intensity earth tremors and occasional volcanic activity are felt throughout the islands. Destructive earthquakes occur several times a century. Hot springs are numerous and have been exploited as an economic capital by the leisure industry.

The mountainous islands of the Japanese Archipelago form a crescent off the eastern coast of Asia as its shown in Japan topographic map. They are separated from the mainland by the Sea of Japan, which historically served as a protective barrier. The country consists of four principal islands: Hokkaidō, Honshū, Shikoku, and Kyūshū; more than 3,000 adjacent islands and islets, including Izu Ōshima in the Nanpō Islands; and more than 200 other smaller islands, including those of the Amami, Okinawa, and Sakishima chains of the Ryukyu Islands.

The national territory of Japan includes the small Bonin or Ogasawara Islands, which include Iwo Jima and the Volcano Islands (Kazan Retto), stretching some 1,100 kilometers from the main islands as its mentioned in Japan topographic map. A territorial dispute with Russia, dating from the end of World War II, over the two southernmost of the Kuril Islands, Etorofu and Kunashiri, and the smaller Shikotan and Habomai Islands northeast of Hokkaidō remains a sensitive spot in Japanese-Russian relations as of 2005. Excluding disputed territory, the archipelago covers about 377,000 square kilometers. No point in Japan is more than 150 kilometers from the sea. The four major islands are separated by narrow straits and form a natural entity. The Ryukyu Islands curve 970 kilometers southward from Kyūshū. 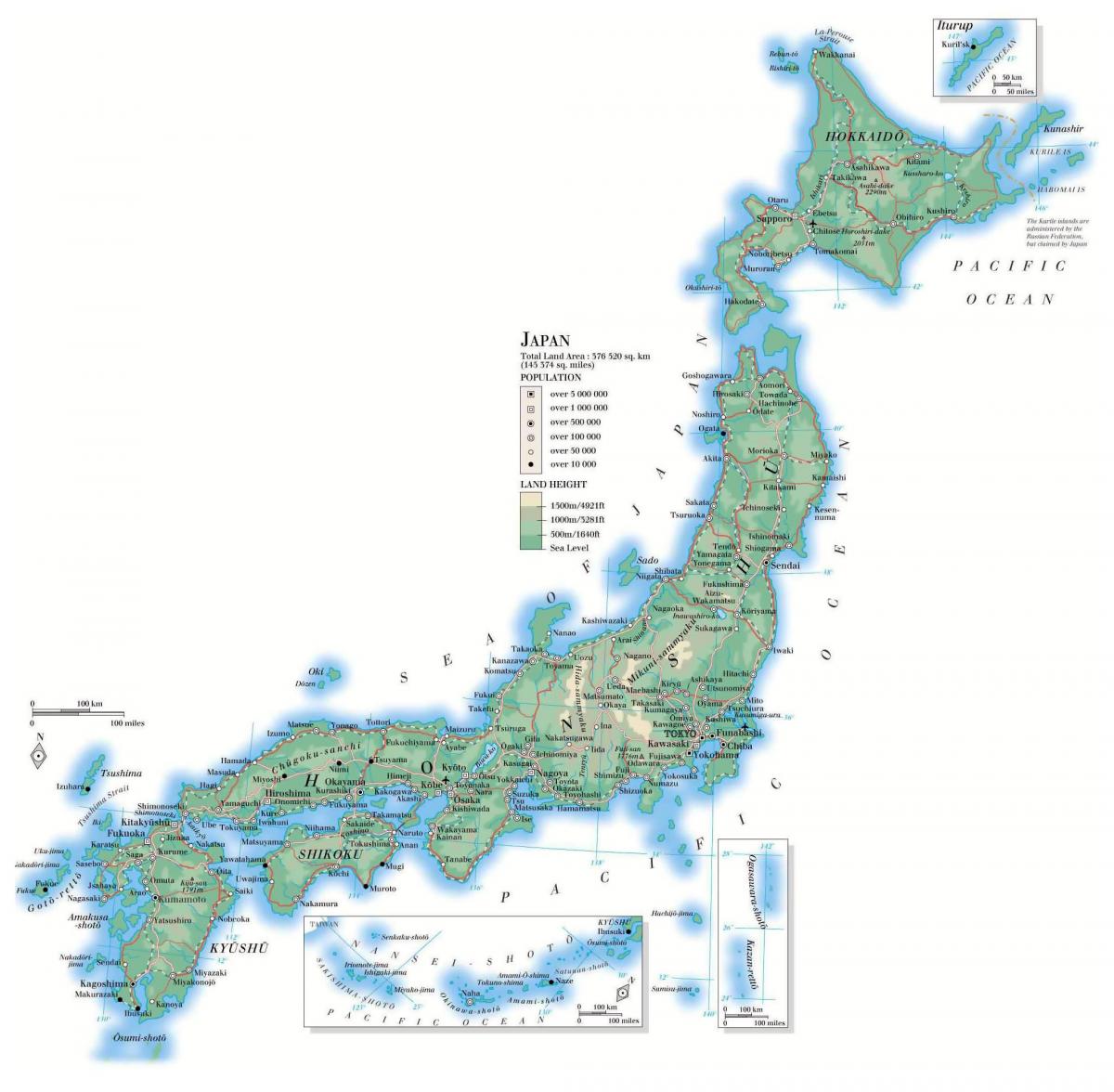 The Japanese landscape is rugged, with more than four-fifths of the land surface consisting of mountains as its shown in Japan elevation map. There are many active and dormant volcanoes, including Mount Fuji (Fuji-san), also spelled Fujisan, also called Fujiyama or Fuji no Yama which, at an elevation of 12,388 feet (3,776 metres), is Japan highest mountain.

Hachirōgata (八郎潟) is a lake in the Akita Prefecture in northern Japan as you can see in Japan elevation map. Its formal name is Lake Hachirō (八郎湖 Hachirō-ko), but it is also called Hachirōgata Regulating Pond (八郎潟調整池 Hachirōgata chōseichi). At 4 meters below sea level, Hachirōgata is now the lowest elevation point in Japan. Hachirōgata was the second-largest lake in Japan after Lake Biwa.

The extreme points of Japan include the coordinates that are farthest north, south, east and west in Japan, and the ones that are at the highest and the lowest elevations in the country as its mentioned in Japan elevation map. Japan northern-most point is disputed, as both Japan and Russia have claimed Iturup, the island on which the point is located. The southern-most point is Okinotorishima; the western-most is Cape Irizaki in Okinawa Prefecture, and the eastern-most is Minami Torishima. The highest point in Japan is the summit of Mount Fuji at 3,776 metres (12,388 ft). At 150 m (492 ft) below sea level, the bottom of Hachinohe mine is the country lowest elevation point. The surface of Hachirōgata is Japan lowest natural point at 4 m (13 ft) below sea level. 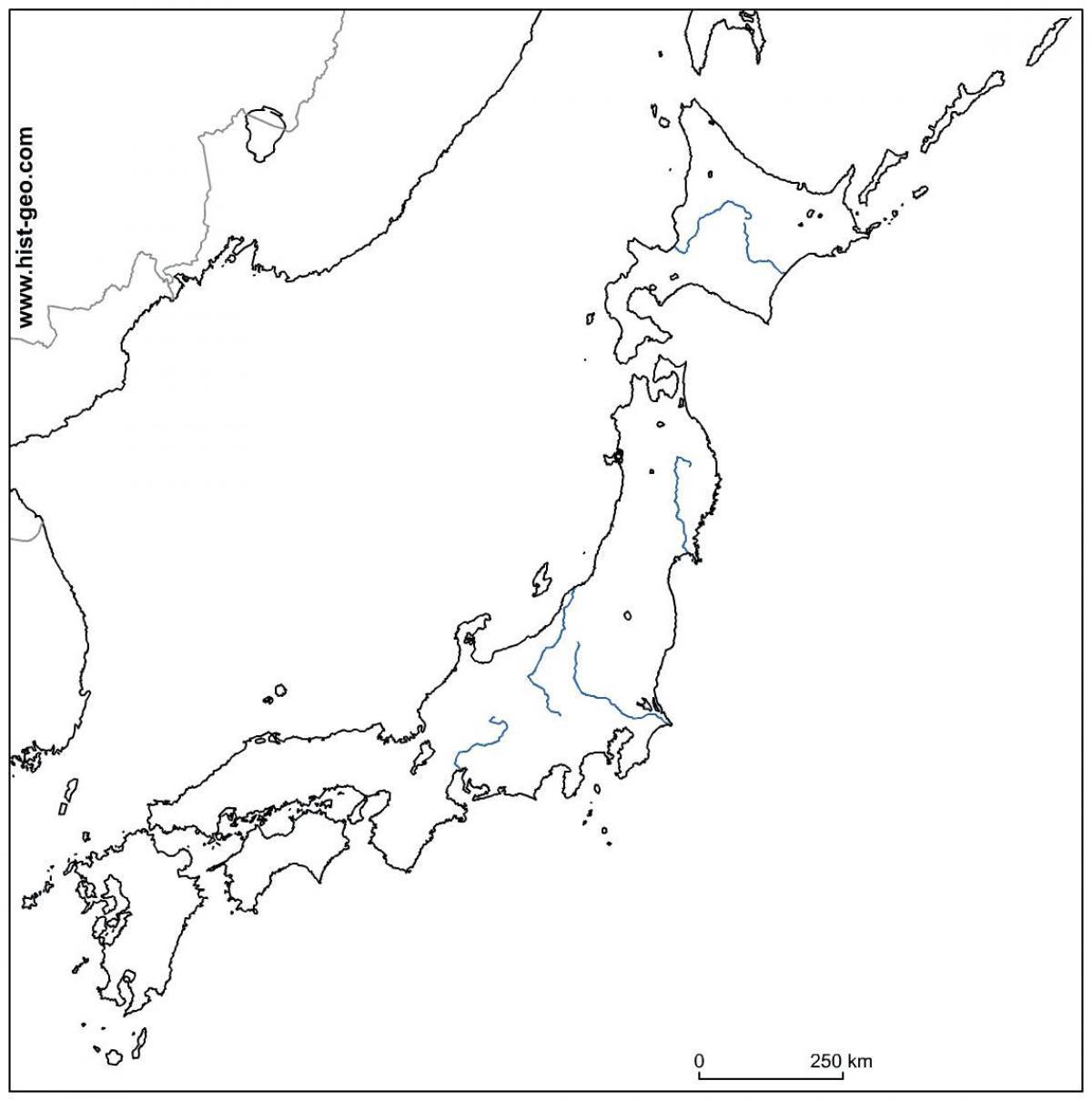 The rivers in Japan map shows the principal rivers with their names of Japan. The rivers map of Japan will allow you to find the main rivers which flow in and through Japan in Asia. The Japan rivers map is downloadable in PDF, printable and free.

Rivers are generally steep and swift, and few are suitable for navigation except in their lower reaches as its shown in Japan rivers map. Most rivers are fewer than 300 kilometers in length, but their rapid flow from the mountains provides a valuable, renewable resource: hydroelectric power generation. Japan's hydroelectric power potential has been exploited almost to capacity. Seasonal variations in flow have led to extensive development of flood control measures.

Most of the rivers are very short. The longest as its mentioned in Japan rivers map, the Shinano River, which winds through Nagano Prefecture to Niigata Prefecture and flows into the Sea of Japan, is only 367 kilometers long. The largest freshwater lake is Lake Biwa, northeast of Kyoto. Extensive coastal shipping, especially around the Seto Inland Sea (Seto Naikai), compensates for the lack of navigable rivers. The Pacific coastline south of Tokyo is characterized by long, narrow, gradually shallowing inlets produced by sedimentation, which has created many natural harbors.

Rivers in Japan are short and steep and flow rapidly and violently. Moreover, the ratio between the normal volume of the flow and that during a storm is extremely great. Seeing the Joganji River in Toyama prefecture as you can see in Japan rivers map, Johannes de Rijke exclaimed, “Rivers in Japan are like waterfalls”. A Dutch engineer hired during the Meiji Era (1868 –19111), de Rijke contributed substantially to flood project in major rivers in Japan, such as the Kiso, the Nagara, and the Ibi Rivers, known as the “three rivers of Kiso”. De Rijke’s statement is an apt description. Rivers in Japan characteristically flow directly from mountain to sea. A great amount of rains falls on the Japanese archipelago during the rainy season (heavy rains of June and July) and typhoon seasons; and during periods of intensive rainfall, even a small stream that usually runs low may become a raging torrent. 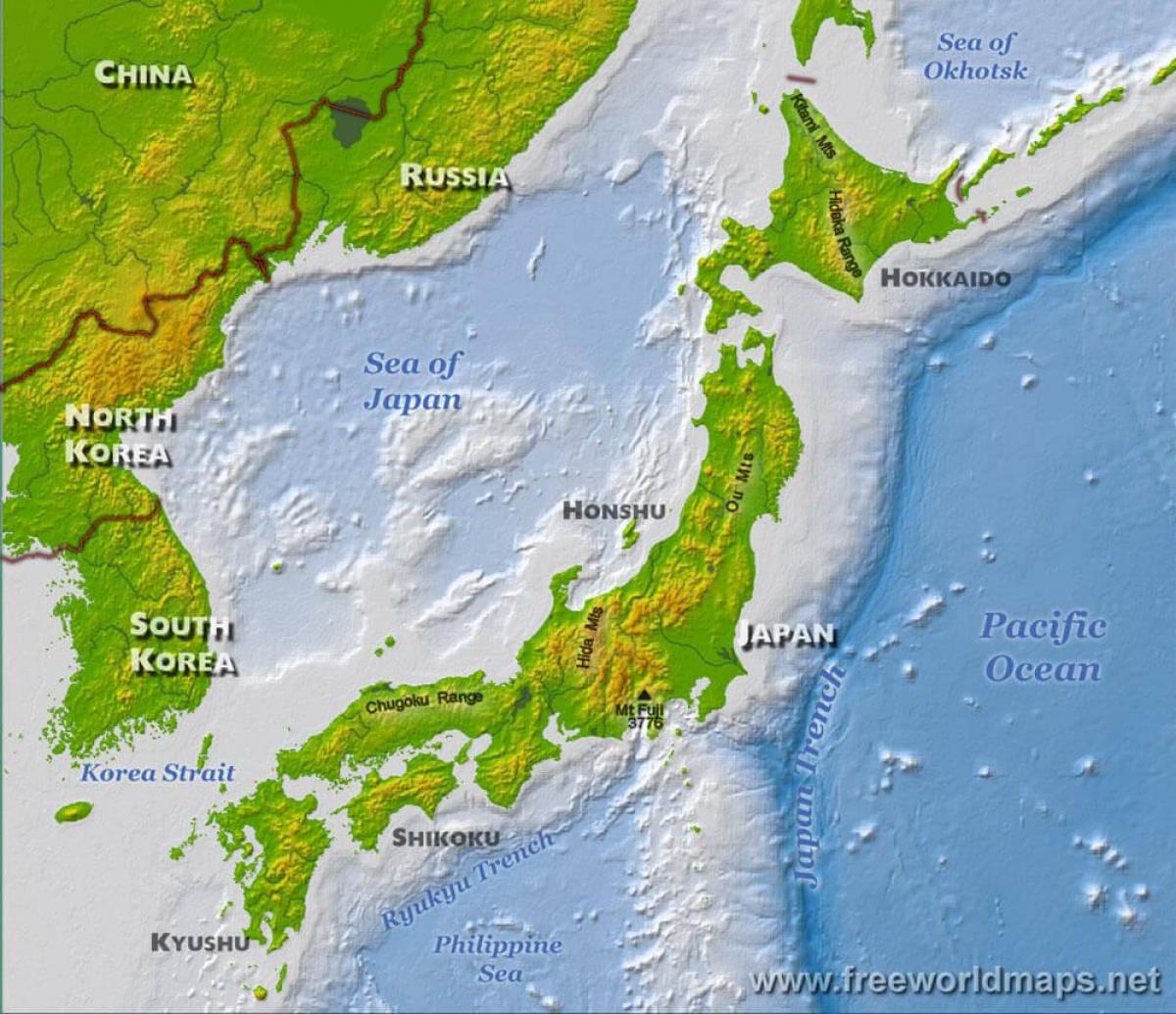 About 73 percent of Japan area is mountainous as its shown in Japan mountains map, and scattered plains and intermontane basins (in which the population is concentrated) cover only about 25 percent. A long chain of mountains runs down the middle of the archipelago, dividing it into two halves, the "face," fronting on the Pacific Ocean, and the "back," toward the Sea of Japan.

On the Pacific side are steep mountains 1,500 to 3,000 meters high, with deep valleys and gorges as its mentioned in Japan mountains map. Central Japan is marked by the convergence of the three mountain chains—the Hida, Kiso, and Akaishi mountains—that form the Japanese Alps (Nihon Arupusu), several of whose peaks are higher than 3,000 meters. The highest point in the Japanese Alps is Mount Kita at 3,193 meters. The highest point in the country is Mount Fuji (Fujisan, also erroneously called Fujiyama), a volcano dormant since 1707 that rises to 3,776 meters above sea level in Shizuoka Prefecture.

On the Sea of Japan side are plateaus and low mountain districts, with altitudes of 500 to 1,500 meters as you can see in Japan mountains map. None of the populated plains or mountain basins are extensive in area. The largest, the Kanto Plain, where Tokyo is situated, covers only 13,000 square kilometers. Other important plains are the Nōbi Plain surrounding Nagoya, the Kinki Plain in the Osaka-Kyoto area, the Sendai Plain around the city of Sendai in northeastern Honshū, and the Ishikari Plain on Hokkaidō. Many of these plains are along the coast, and their areas have been increased by reclamation throughout recorded history. 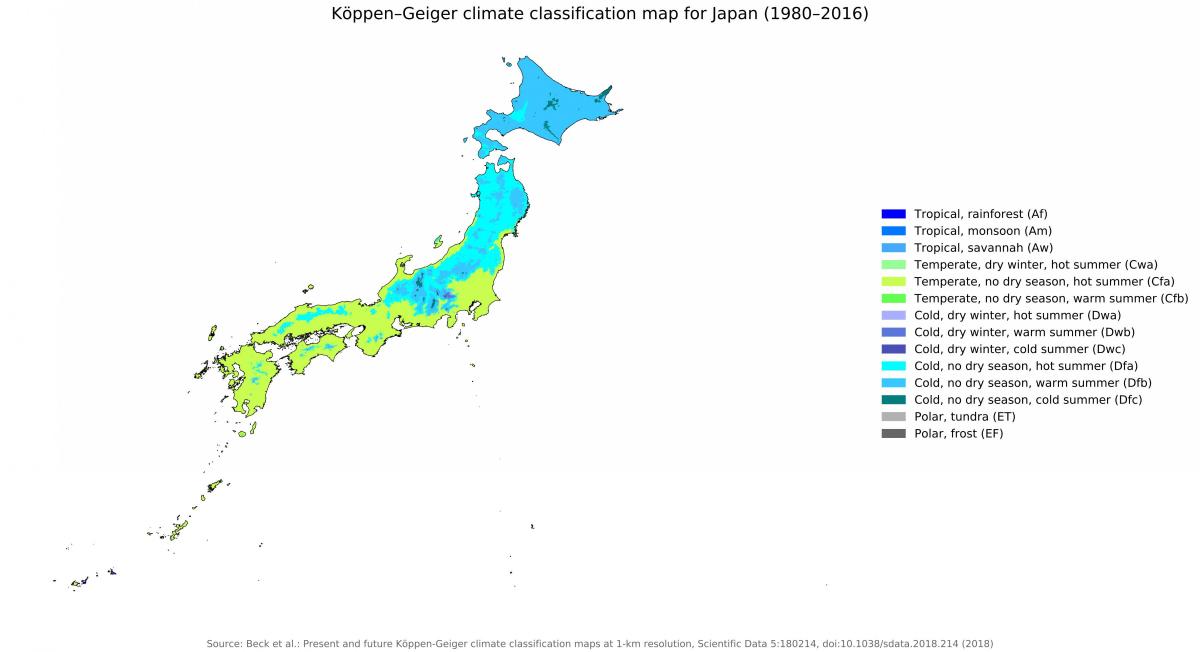 Japan belongs to the temperate zone with four distinct seasons, but its climate varies from cool temperate in the north to subtropical in the south as its shown in Japan climate map. Two primary factors influence Japan climate: a location near the Asian continent and the existence of major oceanic currents. Two major ocean currents affect Japan: the warm Kuroshio Current (Black Current; also known as the Japan Current); and the cold Oyashio Current (Parent Current; also known as the Okhotsk Current).

Japan is generally a rainy country with high humidity. Because of its wide range of latitude and seasonal winds, Japan has a variety of climates, with a latitude range often compared to that of the east coast of North America, from Nova Scotia to the U.S. state of Georgia. Tokyo is at about 35 degrees north latitude, comparable to that of Tehran, Athens, or Las Vegas. Regional climatic variations range from humid continental in the northern island of Hokkaido extending down through Northern Japan to the Central Highland, then blending with and eventually changing to a humid subtropical climate on the Pacific Coast and ultimately bordering very closely with a tropical climate on the Ryukyu Islands as its mentioned in Japan climate map.

Climate varies dramatically with altitude and with location on the Pacific Ocean or on the Sea of Japan as you can see in Japan climate map. Northern Japan has warm summers but long, cold winters with heavy snow. Central Japan in its elevated position, has hot, humid summers and moderate to short winters with some areas having very heavy snow, and southwestern Japan has long, hot, humid summers and mild winters. The generally humid, temperate climate exhibits marked seasonal variation such as the blooming of the spring cherry blossoms, the calls of the summer cicada and fall foliage colors that are celebrated in art and literature.